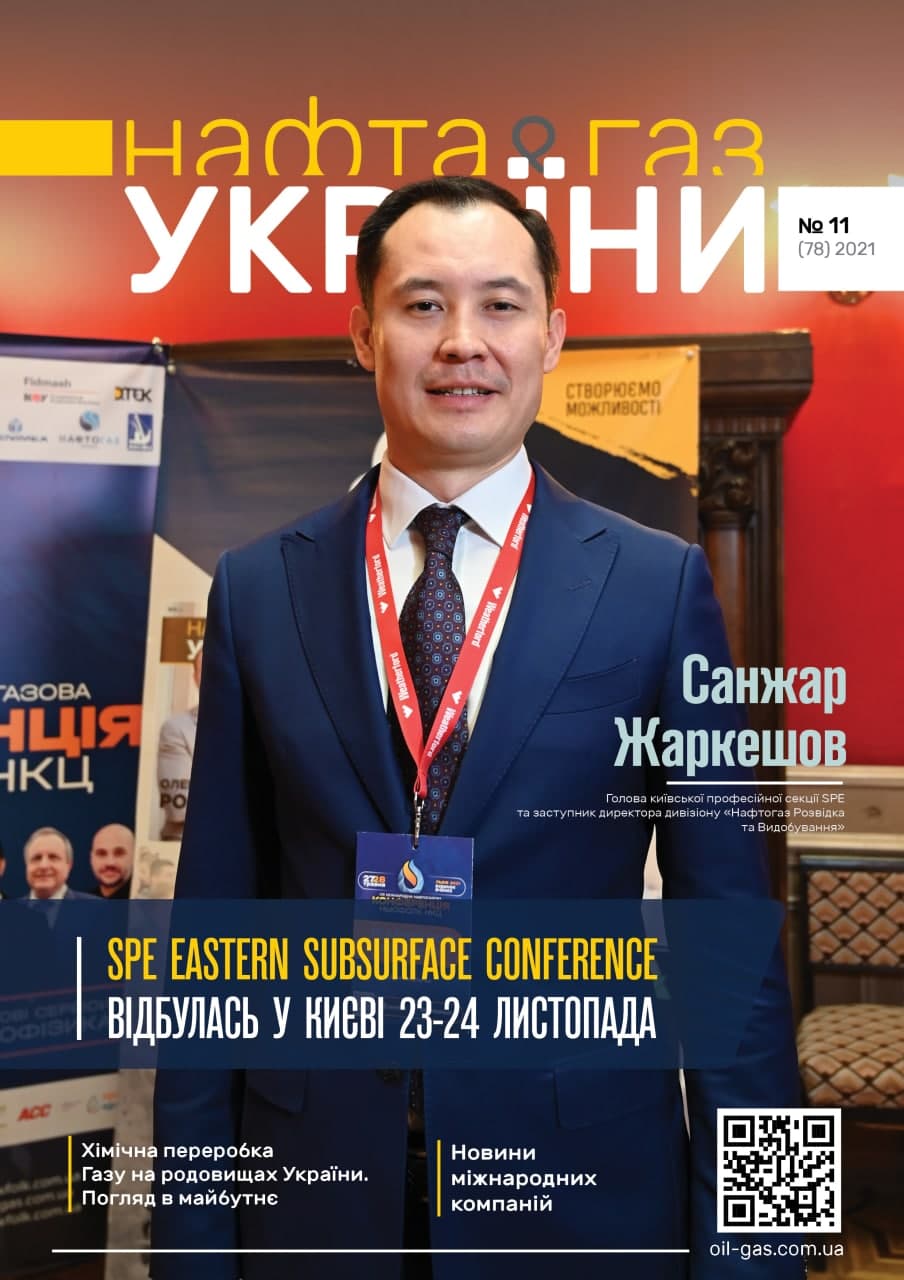 Naftogaz launched new large-scale production projects with a potential of up to 600 bcm of gas reserves. International expertise could not have come at a better time for the implementation of such plans. Mavrikiy Kalugin, Member of the Board of Naftogaz, within the SPE Eastern Europe Subsurface Conference held on November 23-24 in Kyiv told why SPE is the flagship of international professional expertise and why the experience of the members of the union is useful to the domestic cases. In particular, he noted that for oil and gas companies it is a source of ideas and solutions for current production cases. For young professionals, it is an opportunity to bring their ambitions into effect and be on the same wavelength with experienced professionals.
For the first time in Ukraine, DTEK Oil&Gas, together with Weatherford, used low-depth video cameras to study the wellbores of the existing well stock in real time. The pilot project is being implemented in cooperation with the international contractor Weatherford.
DTEK’s oil and gas business tested, as part of the pilot project, low-depth video cameras at the Semirenkovskoe field to determine the causes for the impenetrability of the wells while logging. DTEK Oil&Gas is engaged in the project in cooperation with the international service company Weatherford, acting as a contractor for lowering cameras into the wells. The supplier of DHVI video cameras is Symoil. Cameras can be used in extreme conditions at pressures up to 1,000 atmospheres and temperatures up to 150-160°С. This equates to be used to study wells over 5,000 m deep in real time.
Roman Opimakh, Head of the Ukrainian Geological Survey, noted on his Facebook page that the need to update the human capacity of the industry is now very urgent. In order to involve young specialists, the Ukrainian Geological Survey invites students to undergo practical training.
On November 24, 2021, Roman Opimakh, together with Pavel Bovsunovskiy, CEO of GNPP Geoinform, and Konstantin Tkachenko, head of sector for dealing with human resources and state enterprises, held a lecture for students and teachers of geological specialties from leading educational institutions of Ukraine.
During his speech, Roman Opimakh told about the main activity vectors of the nowaday geological agency. It comes to the implementation of projects for the development of strategic minerals, the extraction and use of which will contribute to strengthening the national security of Ukraine, the provision of special permits for subsoil use through electronic bidding and the implementation of agreements on the distribution of hydrocarbon products.

In November of this year, UNGS celebrated the 7th anniversary of the grand opening of the service workshop. The service workshop of the company is located in the center of the leading oil and gas producing region of Ukraine in the city of Poltava and is equipped with modern equipment. It was built similar to a workshop in Canada, complying with all the requirements and standards of the manufacturer Wenzel Downhole Tools ULC. The total area of the workshop is 2000 m2. During the work, the service of Wenzel downhole tools of different diameters was carried out: 788 DDM, 230 HJDA jars, 82 HMJ jars, 108 pieces of partner companies. That is, more than 1100 pieces of equipment.
Ukrgazvydobutok, which is part of the Smart Energy group of companies, started drilling the well No. 29 at the Ostroverkhovskoe field (Kharkiv region).
The drilling of the new well, with a design depth of 4,650 m, is scheduled to be completed in Q2 2022. Subject to further successful tests, commissioning of the well is expected in Q3 2022.
The well No. 29 is an exploration well. It is designed to explore hydrocarbon deposits of the Visean stage of the Mississippian period and the upper decompacted part of the crystalline basement, as well as to clarify the position of the gas-water contacts of the deposits of the Serpukhovian stage of the Ostroverkhovskoe field.
On November 13, 2021, a pipe depressurization occurred at the AO-2 downstream refinery of the GK-3/1 complex of fuel production No. 1 of Ukrtatnafta PJSC, feeding into the ignition of crude oil.
Thanks to the coordinated actions of the SESU’s and Ukrtatnafta’s divisions, the fire was quickly eliminated. No injured.
Currently, repair work is underway in order to launch the downstream refinery, which is planned to be completed within a few days.
The company is making every effort to resume the delivery of petroleum products and fulfill its obligations to its counterparties and customers in the shortest possible time. The start date for the delivery of full range of petroleum products will be notified in the near future.

The Smart Energy group of companies successfully completed workover and resumed operation of the well No. 62 at the Ostroverkhovskoe field in the Kharkiv region. This made it possible to obtain commercial gas flow of 75 mcm/day.
In the process of the well workover, exploration work was carried out to assess the potential of the C-22 horizon and the current hydrodynamic state of the deposits of the C-5c horizon, the downhole equipment was substituted, and the well was switched to the higher-lying C-4в horizon. Involving the well No. 62 to the development of the C-4в horizon will optimize reservoir development system and accelerate the recovery of its reserves.
Zakhidnadraservis group of companies intends to increase natural gas production by 27.5% in 2021.
"This year, we plan to increase production to 260 mmcm. In 2021 we will drill 15 wells, in 2020 we drilled 14," Zinoviy Kozitsky said in an interview with the Economicheskaya Pravda, Energoreforma reports.
In turn, DTEK is considering the possibility of increasing investments in natural gas production in 2022 by almost 1.9 times compared to the current year - up to USD 186 million, CEO of the parent company Maksim Timchenko said at a press conference in Kiev.
"We are making huge investments in gas production. This year we invested USD 100 million in gas production. Now the investment in the amount of USD 186 million is being discussed for the next year," he said, Energoreforma reports.
As reported, DTEK's investments in 2016-2020 in gas production development amounted to USD 350 million.
Ukraine and EP Ukraine B.V. (founders - Czech EP Power Europe and Slovak NAFTA) signed production sharing agreement (PSA) for the Grunevsky and Akhtyrsky hydrocarbon blocks for a term of 50-years, Energoreforma reports.
According to the Ministry of Energy, the first Deputy Minister Yuri Vlasenko signed the agreement on behalf of Ukraine, and Lyubomir Kopchik signed it on behalf of the investor company.
The signing ceremony took place in the presence of the Minister of Energy German Galuschenko, Ambassador of Slovakia Marek Shafin and Ambassador of the Czech Republic Radek Matula.
According to the Ministry of Energy, investments in these two transactions will amount to about UAH 1.5 billion.

Wellsite Digital entered into a contract with the world famous Drilling Academy Well Academy (Apeldoorn, Netherlands) for the use of licensed training materials that meet the IWCF requirements. An important advantage is that the IWCF training and certification program developed by Well Academy is constantly updated according to the latest international standards.

As part of the expansion of the training scope, Wellsite Digital CEO of the training center Igor Vitrik, together with the Rector of Poltava Polytechnic Volodymyr Onishchenko, paid a working visit to the Dutch partner company Well Academy.
During a meeting with Director for Training Development Jan Willem Flamma and Regional Director George Galloway, they discussed in detail new areas of professional training and conditions for closer cooperation between Wellsite Digital, the Yuri Kondratyuk Poltava Polytechnic National University and the Drilling Academy Well Academy and signed a trilateral Memorandum of Cooperation.
System Oil Engineering is completing the construction of a turbo-expander at the gas distribution station of the Vodyanovskoe field.
System Oil Engineering together with Ukrainian and American partners is implementing a large investment project - the construction of a turbo-expander unit at the gas distribution station of the Vodyanovskoe field (Kharkiv region).
So far, the company received QB.Jones’s necessary equipment from the United States for the construction of the aforementioned plant, which has been expected for about nine months. The American manufacturer completed the order in record time, as customers, as a rule, await equipment of this level at least a year.
The aforementioned plant will make it possible to improve gas processing, increase the profitability of the company’s production and reduce the cost of work. There will be also a significant reduction in greenhouse gas emissions. In addition, the project will create new jobs.
The plant capacity exceeds 1.5 mmcm of gas/day. The construction of the project is at the completion stage, it will be put into operation gradually until the end of 2021.
Ukraine’s gas storage operator – Ukrtransgaz - opened public access to operational and archived data on the operation of UGS facilities in Ukraine on the company's website. The created analytical panels contain a number of physical and commercial indicators of the domestic underground gas storage system. Most of them were not open to public before. Thus, the Gas Storage Operator significantly increases the level of transparency of its work in conformity with the best international standards.