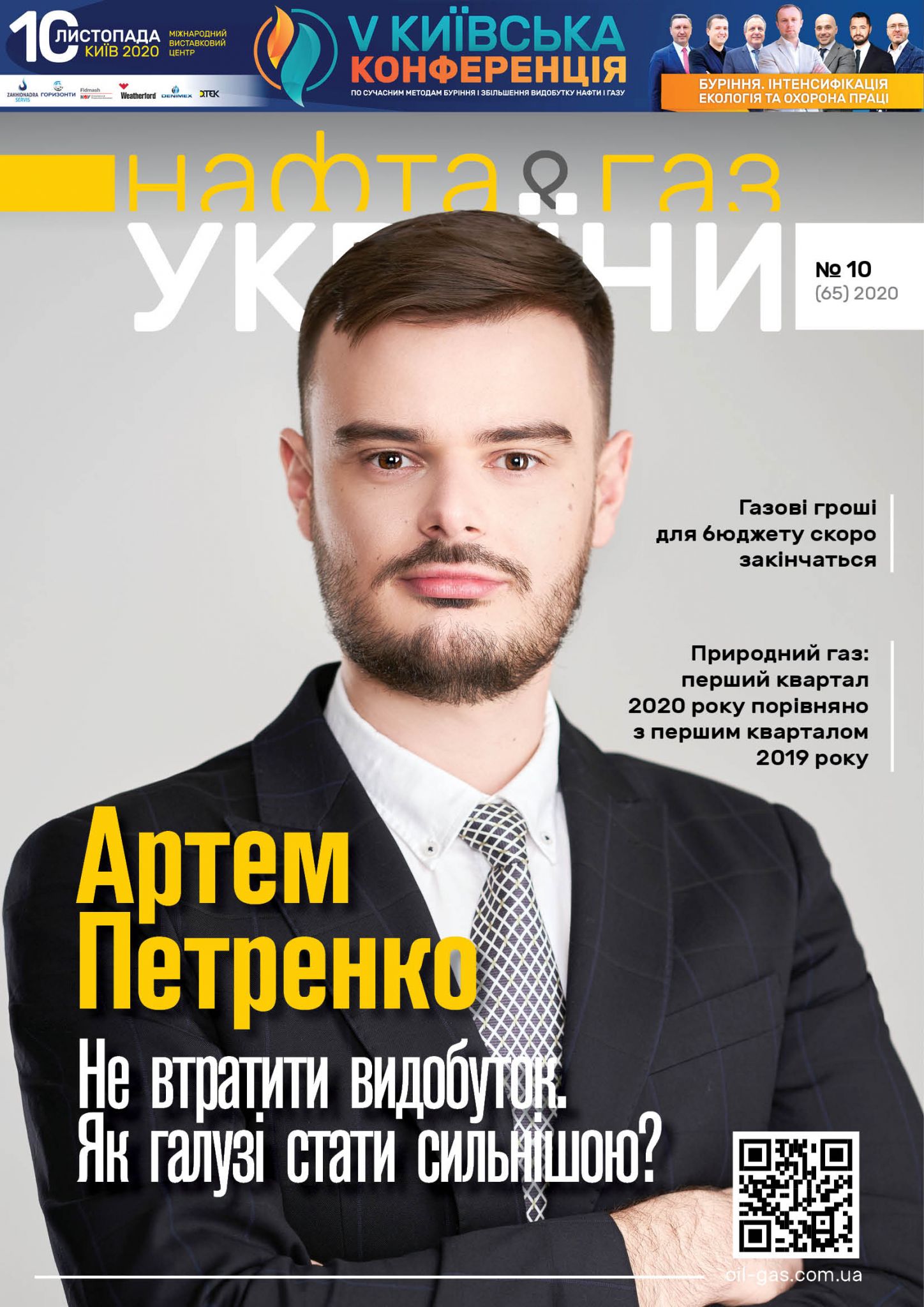 On September 24, the Ukrainian Energy Exchange launched the Trading Platform on the short-term natural gas market. Market participants will be able to settle their imbalances within one day in order to balance their portfolios daily.

The trading platform operates in accordance with the requirements of the GTS Code and provides the opportunity to trade short-term standardized products to adjust short-term fluctuations in supply/ demand and to balance them. The trading platform operates in continuous trading mode on the intraday market. Transactions are settled using escrow accounts to manage the risk of non-payment.
According to the recent data of Ukrnafta PJSC, in September 2020 the company produced 119.7 thousand tons of oil and condensate and 89.3 mmcm of gas, which is, respectively, 3.2% and 5.9% less compared to the same period in 2019. Average daily hydrocarbon production in September amounted to 3.99 thousand tons of oil and condensate and 2.98 mmcm of gas, slightly decreasing compared to last year.
Last week, Naftogaz Exploration and Production brought up the latest developments on the strategy of increasing the resource base to be discussed by the Expert Council.
It comes to such areas as additional exploration of existing and new (Greenfield) fields; development of tight gas, exploration of the Black Sea shelf; intensification of work at great depths; research of the prospects of the Carpathian region; development of promising areas under production sharing agreements (PSA).

Drilling company Horizonty drilled a well 1,400 m deep. The drilling period was 17 days, and the daily production rate was 55 mcm.

DTEK Oil&Gas completed the construction of the deep well No. 59 5,245 m deep at the Machukhskoe gas condensate field. This is one of the most complex gas fields in Ukraine.
Due to the use of advanced technologies, the drilling time was reduced to 141 days. Previously, the construction of such wells lasted for up to a year or more. The drilling contractor was Service-Oil LLC that used Drillmec-350 rig equipped with a Top Drive system. Bit service was provided by NOV. Traditionally drilling fluids, including hydrocarbon inverse emulsions, were provided by Geosintez-Engineering. Wellbore trajectory control, automatic verticality control, optimization of slaughter parameters and drilling were carried out by Schlumberger through RSS, LWD and a system of bottom technological sensors.
General contractor for well cementing was SSK LLC, subcontractor - Drilling Advisor LLC (development and implementation of grouting systems).
For nine months of this year, DTEK Oil&Gas paid UAH 29 million of royalty to the budgets of the Poltava region. Thanks to these funds, communities will be able to improve infrastructure, implement projects in the field of health care, education, culture and energy efficiency.
Acting CEO of Ukrtransgaz Sergey Pereloma explained how Ukrtransgaz works after one of the important changes in the gas market of Ukraine - the Ukrainian GTS Operator unbundling.
During the online discussion on October 19, Sergey Pereloma noted that the key directions for the further development of the Gas Storage Operator in the near future are the modernization of UGSs, the development of the commercial function and the development of the Gas Storage Operator according to high European standards. This is a combination of many factors, but the result is self-evident.

Entering into a PSA for oil and gas sites will bring Ukraine up to UAH 40 billion. This was stated by Yulia Borzhemskaya, DTEK Oil&Gas Regulatory Policy Manager, during the Ist Energy Law Conference organized by the Ukrainian Bar Association.

“We hope that based on the results of the tenders held in 2019, PSAs will be concluded and, for the first time in the history of PSAs in Ukraine, these agreements will be implemented and become a bright success story for the Ukrainian oil and gas industry. This will attract the attention of a wider range of foreign investors and service contractors to Ukraine. Implementation of agreements can become a significant source of replenishment of the state budget. The international community is closely observing the process of signing the PSA, as it is an indicator of the investment climate in Ukraine,” Yulia Borzhemska noted.
The Polish Oil and Gas Company (PGNiG) signed an investment agreement with the Energy Resources of Ukraine Group of Companies (ERU Group) on a joint project for exploration and production of natural gas in Ukraine.
The agreement establishes a general framework for cooperation and determines a timetable for further work on the site located near the Polish border. The significant production potential of the project is confirmed by the results of PGNiG’s geological studies that show the similarity of the geological structures of the site with Przemysl, the largest natural gas field in Poland. The agreement is an important step towards launching joint activities in the area.
Smart Energy Group announced production results for 9 months of 2020.
The total volume of natural gas production by the Group companies amounted to 301.1 mmcm, 11.1% up compared to production in 9 months of the last year (271.0 mmcm). The Group also increased its total gas condensate production by 10.9%. This figure amounted to 26.4 thousand tons (23.8 thousand tons for 9 months of 2019).

DTEK Oil & Gas confirmed compliance with international industrial safety and environmental protection standards. The press service of the company informs that Neftegazvydobuvannya PrJSC, DTEK Oil & Gas’s upstream asset, has successfully passed a supervisory audit and confirmed the compliance of its gas production activities with international standards in the field of industrial safety and environmental protection OHSAS: 18001 (ISO 45001: 2018), ISO 14001: 2015. The assessment was made by representatives of the British Certification International (UK) Ltd. The company will be granted ISO 45001: 2018 certification by March 11, 2021.

According to Ukrgasvydobuvannya, three Ukrainian gas storages - Dashavskoe, Bogorodchanskoe and Kegichevskoe - have already completed the 2020 injection season with a filling level of about 99%. This is the highest figure in the last 10 years. In early October, the volume of natural gas in domestic storages reached 27.9 bcm.
The volume of natural gas injected into the Ukrainian underground storages in the first nine months of this year is 15.9 bcm, 6.3% up compared to 2019. Of these, residents injected 7.5 bcm of gas, 42.8% less than last year. At the same time, domestic gas storages are in active use by non-residents. Since early 2020, they injected into UGSs 8.4 bcm of gas, which is 4.4 times higher than last year's figures.
Ukraine is now a member of CEEC Scout group. This is reported by the State Service of Geology and Mineral Resources of Ukraine.
Since October 9, 2020, the Service is a full member of the Central-Eastern Europe & Caspian (CEEC) Scout Group, an association of major oil and gas companies and state geological services of Central and Eastern Europe and the Caspian region.
This is a positive signal from the international community, and I am proud that the results of our work forward the growth of confidence in Ukraine and its investment attractiveness, Roman Opimakh, Head of the State Service of Geology and Subsoil of Ukraine, noted.
UKR SKS LLC congratulated Roger Penrose on receiving the Nobel Prize for advances in physics. In 2012, with the support of UKR SKS and Pavel Mazurok personally, Ukrainian students of KNU and KPI attended the lectures of the outstanding physicist for free.

The Court of Appeal annulled the decision of the first instance court to invalidate the special permit for hydrocarbon recovery issued to Arkona Gas-Energy LLC. Smart Energy reports about this.

On September 29, a meeting of the Sixth Administrative Court of Appeal took place to consider the appeal of Arkona Gas-Energy LLC (hereinafter - Arkona), which is part of the Smart Energy Group of Companies and is a Ukrainian asset of the British public company Enwell Energy. The company applied to the Court of Appeal to annul the July decision of the Kyiv District Administrative Court on the claim of Ukrnafta PJSC to invalidate Arkona's special permit for hydrocarbon recovery at the Svistunkivsko-Chervonolutskoe field.
Ukrgasvydobuvannya cannot start drilling 11 new wells due to the lack of official approvals from the state required to complete the company's production plans amid the coronavirus pandemic. For this reason, Ukrgasvydobuvannya potentially loses about 1 mmcm of gas per day and receives less profit, which is a source for paying taxes and dividends to the budget of Ukraine, according to UGV.
The company also noted that at the end of June, the Verkhovna Rada adopted bill No. 3438 to resolve the situation. The document provides for the renewal of the procedure of environmental impact assessment, which has been blocked since the beginning of lockdown. But actually, according to the new law, Ukrgasvydobuvannya is forced to re-apply announcements on the start of public discussions within the framework of previously prepared and published EIA reports, which will result in a significant increase in the deadline for work start. It will take at least another 75 days to get the conclusions.
Thus, UGV suggests that, taking into account the already lost time, the total potential gas losses of the company due to the inability to start drilling will reach 200 mmcm.
Budget funds will be allocated for the EITI electronic reporting system. It is proposed to provide UAH 1.26 million for the electronic system for submitting and analyzing the EITI reports (Extractive Industries Transparency Initiative) created within the framework of international technical assistance and cooperation with the German Agency for International Cooperation (GIZ).
NEURC postponed introduction of balancing neutrality fee for a year. Transportation customers will have to pay the first balancing neutrality fee before January 1, 2023 - for 2021-2022 gas year. The relevant decision was made at a meeting of the Commission on September 30.