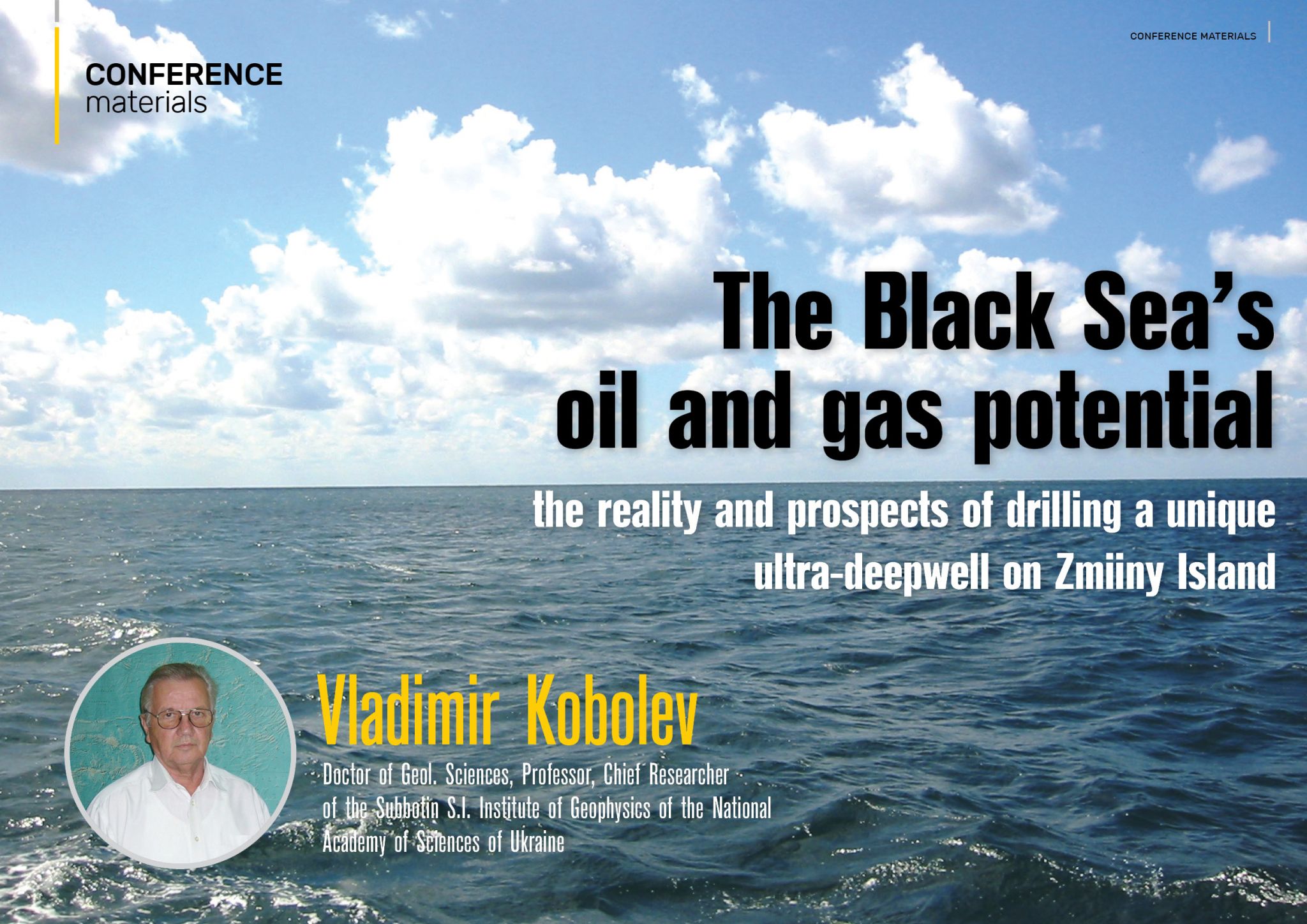 "The Black Sea remains the only wildland in the world. It has a phenomenally huge potential." Gene Van Dyke, President of Vanco Energy Co.

The first exploration well in the Black Sea was drilled on the Golitsyn run high in 1975, almost simultaneously with the start of drilling in the North Sea. Since then, the North Sea passed through all the way to the natural decline in oil and gas production, whereas in relation to the Black Sea there is still no clear answer to the question - does it really contain projected huge reserves of hydrocarbons?
In fact, this question is no different from the famous aphorism: "Is there life on Mars?"

The answer to this question can only be given by drilling ultra-deep offsore wells exceeding 2,000 m deep.

Prior to Russia's annexation of the Crimean autonomy in 2014, Ukraine made some progress in increasing gas production on the shallow northwest shelf. In 2013, it grew up to 1.65 bcm. In 2015, production was to reach 3 bcm due to the completion of the Odeske and Bezimenne fields with resource reserves of not less than 35 bcm of natural gas. At that time, Chornomornaftogaz PJSC owned 17 fields, of which 11 gas fields, 4 gas condensate fields and 2 oil fields. The total reserves of these fields were: 58.56 bcm of natural gas, 1,231 thousand tons of gas condensate, 2,530 thousand tons of oil.

Following the annexation of the Crimea by the Russian Federation, Ukraine lost the ability to produce hydrocarbons in a number of fields (Bezimenne, Odeske, Arkhangelske, Shtormove, Schmidta), as well as continue exploration work in other promising areas (Zakhidno-Golitsynska, Kulisna and the Dnieper paleochannel).

Georgia, Russia, Turkey, Bulgaria and Romania have been actively involved in the oil and gas exploration race within their Black Sea economic areas over the past decade. Unfortunately, Ukraine cannot boast of such studies due to well-known political factors.

The flagship of deep-sea exploration of the Black Sea is undoubtedly Turkey. Since 2006, Turkey drilled eight prospecting wells in the deep-water Economic Zone, which turned out to be " dry”.

Romania made significant progress in studying its shelf. Since the second half of the 2000s, several fields were discovered on the Romanian shelf - Delta – 4 (oil and gas field), East Swan (oil and gas condensate field), West Swan and Pescarus (oil and gas fields), thanks to which annual oil production grew by 7 million tons.

Despite the skepticism about drilling the first Domino-1 deep well in the Romanian sector of the Black Sea (Neptune block, sea depth-930 m), a field with preliminary reserves of 42-84 bcm of gas was discovered in 2011.

The discovery of the Domino-1 field after the Turkish failure in the Romanian sector of the Black Sea gave an impetus to the start of works on the Khan Asparukh block in Bulgaria, the Scythian area and the Foros section in Ukraine, the north Black Sea section of Russia and the continuation of work in Turkey’s deep water.

Georgia announced the discovering of three promising sites, the potential of which was estimated at 70 million tons up to 1.3 billion barrels of oil. However, there is no real confirmation of this yet. 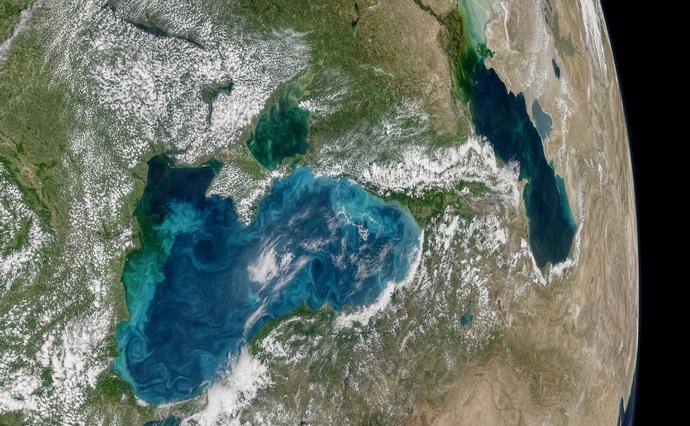 All fields of the Black Sea in operation are located on the shallow shelf, while promising oil and gas structures are expected to be in the deep-water part of the water area.

Currently, 21 wells were drilled at sea depths exceeding 500m: Romania – 10, Turkey-8, Bulgaria-2 and Russia – 1. So far, not a single well was drilled in the Ukrainian and Georgian deep water segments.

In December 2017, Rosneft, together with the Italian company Eni, started drilling the first Maria-1 ultradeep exploration well in the Russian Black Sea sector on the Shatsky shaft.

Drilling the Maria-1 prospecting well was carried out using the Scarabeo-9 drilling platform owned by Saipem.

The reason for the terminaton of work by the Italian company Eni was anti-Russian sanctions.

The drilling revealed a fractured carbonate reservoir with a capacity of more than 300 meters, which, according to Rosneft's press release, is highly likely to contain hydrocarbons.

The discovery of a number of giant ultradeep oil concentrations at depths exceeding 10 km confirms the possibility of the existence of hydrocarbon deposits at significant depths.

q  The analysis of geological, geophysical and geochemical data on various oil and gas basins of the world made by A. Yu.Lukin shows "that the key factor in the formation of oil and gas fields is not the long-standing geologically prolonged catagenetic processes of "drip" primary migration during tectonic immersion of sedimentary strata enriched with biogenic organic matter, but the deep degassing of the Earth" [Lukin, 2015, p. 17].

q  The location of hydrocarbon deposits in the Black Sea is directly connected with the main channels, which are disjunctive nodes – zones of intersection of deep faults activated in different epochs of geological history. The powerful accumulation of hydrocarbons in these nodes, along with intensive gas discharge of the bottom, is difficult to explain without involving the component of the depth.

To establish a theory based on observations,

to correct observations through theory is the best

A set of basic criteria for the oil and gas potential of a crystalline basement is justified: geodynamic, tectonic, fluidodynamic, structural-geomorphological and petrographic, which will allow it to be purposefully used to assess and predict promising structures in foundation rocks.

Olexiy Kontorovych could not attend the conference, but the title of his report was eloquent:

"Oil deposits in the crystalline basement and their genesis. I can't keep quiet any longer."

In the north-western water area of the Black Sea, a low-velocity zone (LVZ)was established by means of petrophysical thermobaric modeling at a depth of 6-12 km, the nature of which we associate with decompressed rocks of high fracturing, which can be promising for hydrocarbons.

Thermobaric LVZ conditions at depths of 4÷12 km-P=1÷3 kbar, T = 150÷250C make it possible to refer it to the thermobaric area of mineral matter decompression, which can act as a collector of hydrocarbons of deep origin.

A degassing channel was discovered for one of the mud volcanoes of the Black Sea, the roots of which are located below the Moho surface (21 km from the bottom surface).

It can be assumed that the powerful gas-fluid flow from the mantle weakens all sedimentary thickness and promotes emergence of diapiric structures in the Maikop deposits.

In other words, it is not diapirs in the Maikop clays that create mud volcanoes, but, on the contrary, the gas-fluid localized flow causes their occurrence.

This is evidenced by the presence of positive structures along the entire path of the gas-fluid flow through the entire sedimentary stratum.

  Involvement of the mechanism of plum-tectonic deep degassing made it possible to estimate in a new light the role of geodynamic factors associated with both the evolution of the Black Sea megadepression and the genesis of hydrocarbons. 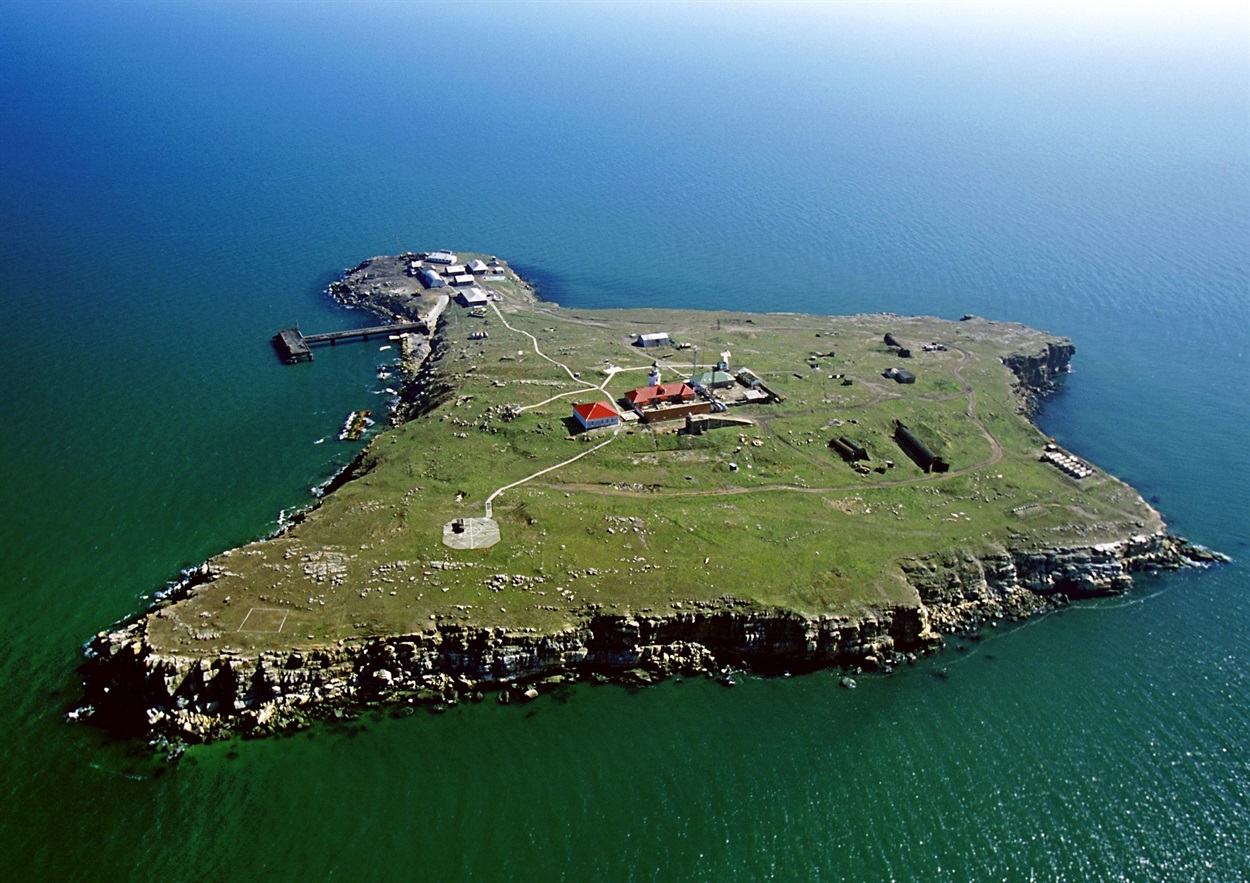 Within the Black Sea megadepression, the main prospects for the discovery of large deposits are associated with deep faults, decompressed rocks (as well as the intermediate complex); biocarbonate constructions of Mesozoic and Cenozoic riphogenic-carbonate complexes of different ages and heterogeneous reservoirs (traps) caused by their paragenetic combinations.

Existence of certain analogies in geodynamics, tectonics and oil and gas potential of different segments of the Black Sea with the Vietnamese shelf, where the known deposits White Tiger, Dragon and others in the granite protrusions of the foundation, along with well-known data on the gas mode (unprecedented gas recovery of the seabed, huge concentration of methane in gas hydrates and in the water-soluble state), allow to highly assess its hydrocarbon potential and prospects for the search for large reserves of hydrocarbons.

I would like to use the conference site to make public some of the views regarding drilling the ultradeep well on the Zmiiny Island. The latter, along with solving the fundamental problems of the geological structure of the joint zone of the Eastern European platform and the Scythian plate and solving current issues of the hydrocarbon potential of the crystalline basement, will be, in my opinion, of independent industrial meaning.

Powerful findings of mud volcanic processes and the formation of gas hydrate clusters is a result of jet migration of mantle fluids into the depressed zones of the crystalline basement and sediments within the Western Black Sea basin.

Zmiiny Island is located in the northwestern part of the Black Sea 20 miles from the mouth of the Danube and 80 miles from Odessa. The island, which total area is 20.5 hectares, is cross-shaped, and the distance between the endpoints is 615 and 560 meters with the highest point above sea level 41.3 m.

At various times, the island was owned by the Roman, Russian and Ottoman empires, as well as Romania. Russian empires's victory in the 18th century over the Turkish naval squadron in the Black Sea marked the end of Turkish control over the island. In fact, since then we can talk about Russian ownership of the island, where in 1842 Russia built a lighthouse. However, 15 years later, as a result of the Crimean War, the island again passed into ownership of Turkey, and then, with the consent of Russia, was transferred to Romania, under which ownership it was until the landing of Soviet troops in 1944. Pursuant to the Paris Conference (1946), Zmiiny island finally became part of the USSR. But after the breakup of the Soviet Union, Romania made claims against Ukraine for violating its rights against Zmiiny island. The reason for this was hydrocarbon deposits discovered on the shelf. 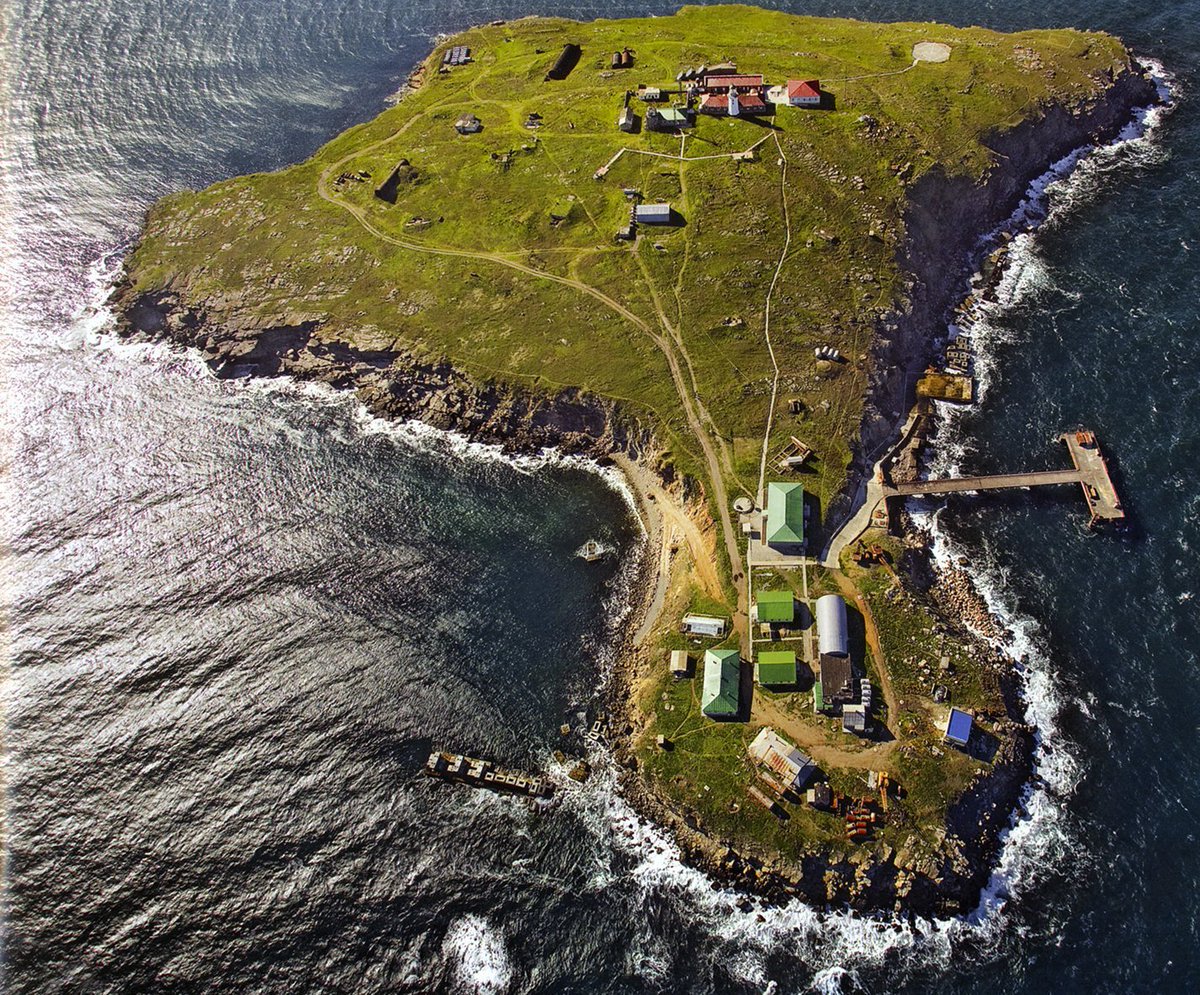 On February 3, 2009, as a result of the verdict of the Hague UN International Court of Justice, Romania received 79.34% of disputed shelf areas with huge reserves of oil and gas, while Ukraine was left with only recognizing Zmiiny as an island not a rock. Today, Zmiiny island is part of the territory of sovereign Ukraine.

Drilling of deep (up to 4.5 thousand meters) and ultradeep wells 6.5 and 7 thousand meters deep (wells №1 - Luhy and №1 - Syniovydne) was mastered in Ukraine in the early 70's of the last century. At that time Europe’s deepest well №1 – Shevchenkova - reached a depth of 7,522 meters in November 1975.

Eight (six gas and two gas condensate) fields were discovered on the northwestern shelf of the Black Sea. Despite the long period of geological exploration, due to the low drillability and insignificant depth of drilling (maximum depth is 4,638 m - the Golitsyna well No.3), the following tasks remain relevant: detailing the geological structure; predicting the distribution of depressed geodynamic zones and related rocks with improved reservoir properties.

Later, the ultradeep Kryvorizka well was drilled in Ukraine.

Zmiiny island is part of the Kiliysko-Zmiine highland, which is composed by a powerful complex of Paleozoic sediments peculiar to the Pereddobruzky depression.

Geological and geophysical preconditions for the formation of a large oil and gas field in the Paleozoic sediments were grounded.